The aims of Yorkshire St. Pauli 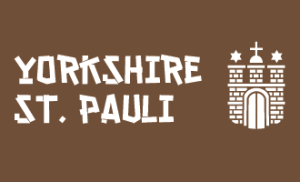 Or perhaps all of the above? Don’t worry, there is an alternative!

FC St Pauli was an ordinary football club until the late 1980s, when, in contrast to the rest of the game in Germany, left—wing fans began to shape the club, rooting out discrimination and celebrating the team, the club and its fan scene. Since those days the fan culture surrounding the club has grown immensely and FCSP has official supporters’ clubs across the globe.

FC St. Pauli are a German second division football team, who are more notable for their actions off the pitch than those on it. The club has a strong and non-negotiable stance on discrimination. Everyone is equal. There is no exception to the rule. Each fanclub agrees to a constitution which states that they will not condone “any form of discrimination against people” and will act “against all forms of racism, sexism and hooliganism, and also against any kind of contempt and discrimination against an individual’s preferences or inclinations”. That isn’t just an empty motto or a standard guideline as used by most football clubs, it is a rule that is actively followed and supported by the fans of St. Pauli and their fanclubs across the world.

In 2010/11 a group of Yorkshire-based FC St Pauli fans found each other on the St. Pauli UK (http://stpaulifansuk.forumup.co.uk). We met for the first time on Friday 13th 2011, deciding to form an official fanclub in Yorkshire. So began Yorkshire St. Pauli!

We meet up and watch games the fixtures allow at various locations in Leeds and wider afield to watch internet streams of St Pauli games on a screen adorned with banners, flags and scarves. The football isn’t always great, but the main aim is to enjoy the football (and everything else surrounding it) amongst friends and likeminded people.

If you fancy watching the magical FC St. Pauli with us in Leeds, surrounded by lovely people from Yorkshire and beyond, and maybe drinking a Sam Smiths beer or two, we’ll make you most welcome. Keep an eye on our website or social media pages for details or get in touch. We might be hard Yorkshire folk, but we don’t bite – St Pauli makes us soft and gooey inside!